Our Mission is Morgans

Dennis Glavis and the Morgan Motor Company proudly welcome you to Morgan West. Morgan West the newest of an elite group of authorized Morgan sports car dealers outside of the UK. Morgan West, serving the greater Los Angeles and Southern California areas, specializes in new and pre-owned Morgan Motor Cars.

We carry a selection of Morgan Aeros, Morgan Roadsters, new Morgan 3wheelers, and preowned Morgan Roadsters. These Morgans hand built by the Morgan Motor Co. are survivors of a dying breed of “coach built” automobiles. With a over a hundred-year history of building fine Morgan Automobiles the Morgan Motor Company has brought their new models into the 21st Century with stylish interiors, powerful 8 cylinder engines, and independent telescopic-gas filled suspension. 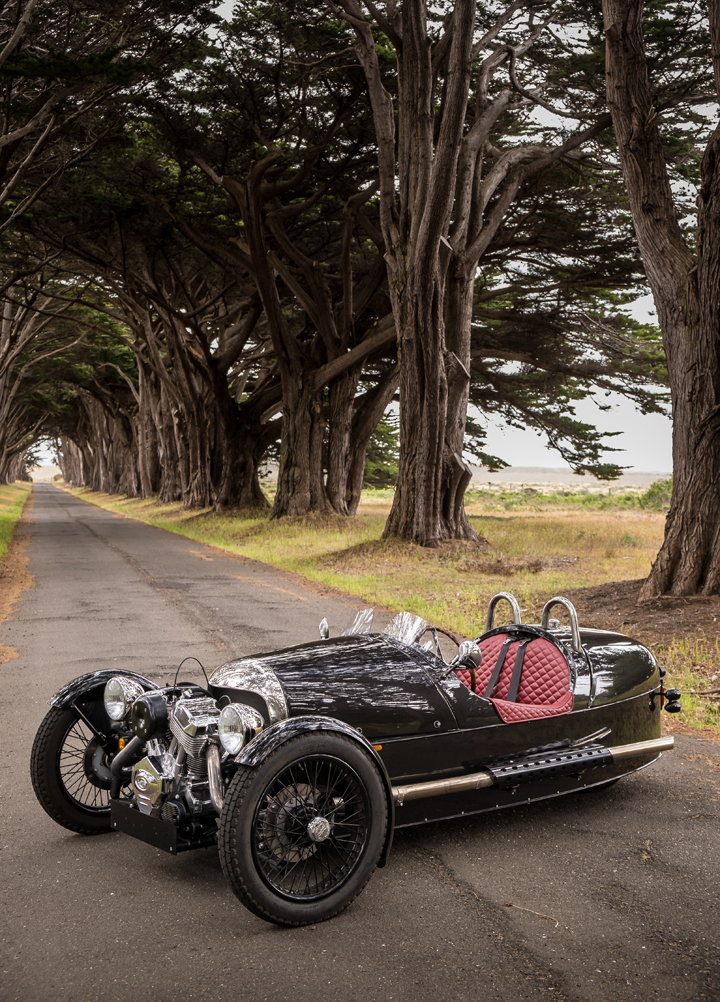 Please contact us at Morgan West whether you are considering a new Morgan Aero 8,Morgan three-wheeler, Morgan Roadster or pre-owned Morgan Sports car. Schedule a viewing and take a drive in a Morgan Sports car up the Malibu Coast so you can experience the feeling of a true “classic” sports car.

MorganWest represents the culmination of 30 years of Morgan enthusiasm, racing, rallying, showing, and selling of the vehicles along with the Morgan spirit. Wanting a Morgan since he was in high school Dennis Glavis somehow always wound up with something else, in college, a ’53 Porsche 356 Cabriolet, then a new Saab Sonnett, 850 MonteCarlo powered.

Dennis bought the Saab after he drove to Fergus Motors in New York City to purchase a new Morgan. With a budget of $3,000, walking into the showroom he found only one mustard yellow Super Sport with a sign reading, “the last new SuperSport we will ever receive, List, $3,000, our price, $4,600.” Gagging, Dennis bought the Saab. In 1972, pen in hand, signing a contract to purchase a ’71 Porsche 911T, he stood up, tore the contract up and drove to Mt. View, California. to buy a ’63 Plus 4 he had looked at the day before. It was all over! Dennis Glavis had become – A Mogman forever more!!!!

Over the next 4 decades, Glavis personally owned some 14 Morgans and sold perhaps a few hundred during the 25-year stint at Ferrari of Los Gatos, helping to keep the Morgan spirit alive in America. He paticipated, driving his ’53 Flatrad, the Flying Haggis, purchased from the infamous Mitchell Brothers (another story), in the la Carrera race and in the Carrera PanAmericana 3 times. He showed his various cars in many different Northern California Concours d’Elegance, slalomed them, rallied them and became an enthusiast within the Morgan Sportscar Club of Northern California, serving as Club President twice, Club Newsletter Editor for 5 years and Events Chairperson for 4 years before relocating to Southern California to open MorganWest. Dennis still serves on the No. Club’s Board of Directors. In 1998, realizing that the 90th Anniversary of the Morgan Motor Company was impending, he organized a Morgan Class for the 1999 Pebble Beach Concours d’Elegance, along with a banquet dinner for some 186 Morganeers from countries all over the world. His was honored to be weeklong host to Peter Morgan.

In December of 2001 Dennis was contacted by Matthew Parkin, Marketing Director of the Morgan Motor Company, calling from Florida, announcing that he would be in Los Gatos the next morning! After a day of Morgan jabber, Mexican food and pub hopping he was asked to become the new Morgan agent for Southern California. A dream come true- it was Christmas come early/late, whatever.

Thus we have the creation of MorganWest, a Morgan enthusiast’s dream, serving the Morgan community and those soon to join the Morgan life. It is our hope to recreate the glory, the joy, so long associated with the Morgan marque, in North America. Other agents have bravely carried the flag for so long, down a hard and winding road. Now there’s a little (or a lot) of help from their friends.

We Specialize in Morgans