Anyone who has been in this Morgan World for any length of time knows that its orbit will sweep in great circles but end up back where it started; again and again….and again. I bought my first Morgan in 1972 in Los Angeles, California. LA is a funny place in many respects. South Pasadena, where I lived at the time, is way out to the north east of the city and Long Beach is a bazillion miles to the south west; but miles in LA don’t seem to matter. A 50 mile drive to go to a movie was not uncommon so it seemed perfectly reasonable for me to drive from Pasadena to Long Beach for Morgan Plus Four Club of Southern California meetings. Unfortunately that first Morgan, and the several that followed it, were not paragons of reliability so I never really integrated with the club. But I did meet people; Morgan people, like Gerry Willburn; and I saw Morgans, like a van bodied Super Aero three-wheeler. I would be hard pressed to say exactly where I saw the van trike in my LA days but I had a clear picture of it in memory when Gerry, in one of our re-acquaintances years later said that he was the current owner. Jump way ahead in time to 2006 and my wife Kathi and I live in Hull Massachusetts, the opposite side of the country from LA. She has a brand new Roadster that we acquired by part trading my 1934 Super Sport three-wheeler. The Roadster blew a fuse on its first road trip, to LobsterMog, an annual gathering of Morgan folks in Maine. Some might say it was appropriate that the newest Morgan arrived at the event on a trailer. Gerry and Barbara Willburn were there on holiday and so participated in the fuse changing ceremony. Several bottles of wine later Kathi, feeling guilty because I sacrificed my trike for her roadster, button holed Gerry and said:” You should sell your three-wheeler to Ron”. And so the next circle began. 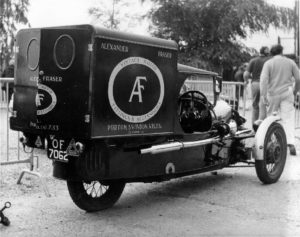 Period photo of the original livery by Alexander Frazier

According to the records from the MTWC registrar, Steve Lister, OF 7062 has an eclectic lineage. It has the straight bottom tubes on the front typical of a Super Aero from 1927 to 1929 but with other features, like the M type bevel box and oil tank more appropriate to 1929-1933. Pictures from Mike Andrews, a previous owner (1964-1966) show it with a Blackburn radiator and JAP engine. The Birmingham registration number OF7062 was issued in late 1930 but the chassis number M326 (a Deluxe Family model) wasn’t dispatched from the Morgan factory until December 1930. What is known for certain is that in 1968 Alexander Frazier owned it. It was Mr. Frazier who fitted the van box to promote his vintage auto parts business.

He also swapped the JAP for a Matchless MX 4 engine, added front hubs and wheels from a later three speed car and converted to Morris hydraulic front brakes. Period pictures show a four wheeled gypsy caravan hitched to the back.

Kathi and I flew to Los Angeles just after Christmas 2006 to collect the car we now refer to simply as OF. Gerry was the third American owner yet the car was never titled in the United States. Very early on, a previous US owner disassembled the car intending to restore it to “original” specifications. The restoration languished. When the door of the Willburn’s storage shed opened we saw the disassembled body, chassis, engine and innumerable corrugated cartons of various sizes chockablock with parts. I remember thinking: “This is my first stupid act of 2007. What can possibly come next?” We built a crate, put in all the bits and shipped it home by truck freight.

For me the decision was easy; I had no interest in returning the car to whatever the original configuration might have been. The charm and character was in the amalgam of eccentricities, for better or worse, that was Sandy Frazier’s vision. And so I began. 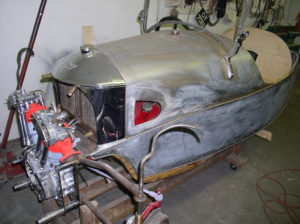 The first step was to inventory, clean, and trial assemble what we had. The Van Body with its lift-up roof door was in excellent condition so it got put aside. The wood body frame was typically worm eaten and rotten but much of it forward of the rear bulkhead was salvageable. I duplicated what was not reusable in ash and poplar and by March of 2007 had the new frame finished. There was no radiator. I was told the owner that began the restoration left it with a shop for repair and was upset when he called for it several years later and it was gone. Original three wheeler radiators use gilled tubes for the cooling matrix. The gills are thin, wrinkled metal washers that are soldered to copper tubes. I bought several thousand gills from Vintage Wings and Radiators and using a jury rigged press made the 100+ tubes required. When the tanks and dome were completed and the whole soldered together I started feeling more confident. Just maybe I will finish this thing. The sheet metal went smoothly but wasn’t completed until late 2008. During this period I had other Morgan projects as well as a day job. Remember Uncle Ron’s maxim: The likelihood of completing any project is inversely proportional to the number of projects in work.

Body wood, sheet metal, chassis, paint and assembly are tasks that I pretty much have to do myself but Morgan projects need help from other sources. First for me is our family. Daughter Robin and son-in-law Mark are hands-on help and make long hours in the shop bearable. Kathi is the pillar that supports the enterprise. She makes sure we stop for a civilized lunch.

Dash panel with instruments and accessories added by Sandy Frazier

But what does one do with a van bodied Morgan three-wheeler? Sandy Frazier sold auto parts we don’t. But… Robin and Mark do brew beer. Outfitted with two 5 gallon kegs, dry ice, scones and a picture of Queen Vic the Morgan Aero Porta-Pub is always a people’s choice favorite at gatherings. Proof indeed that you can buy votes.

Much of what Morgan made can be duplicated by an experienced craftsman but some parts require specialized machining and/or engineering expertise. Without the many people and shops in the Morgan community this car would never have been finished. I am particularly indebted to the Morgan Three Wheeler Club’s Mogspares team of volunteers for their high quality replacement parts. OF7062 rolls about on bits made by Alf Gapper, Pat Bastock, Terry Foxen and others. They are all welcome to stop us for a pint anytime