History of the World according to Morgan

The Morgan sports car, with its flowing lines and nostalgic look, draws attention wherever it goes. Its owners, however, must answer a barrage of questions when stopped at a traffic light or parked in town such as, ‘It’s a antique?’ or ‘Is it a replica?. 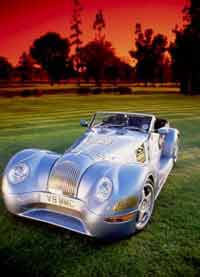 History
The Morgan is a motor industry phenomenon. In a small town in Malvern, Worcester, England, there is a factory run by Peter Morgan and his son, Charles, where the Morgan 4/4, +8 and +4 are still built. They, and the workforce of just under 100, lovingly produce about ten of the hand-built, ash-framed cars per week while the waiting list continues to grow. At last count it was four years long or more.

Peter took over from his father, HFS Morgan, who built a three-wheeled car, with the world’s first independent front suspension, in 1909. Friends and acquaintances all wanted one, and in 1912 the Morgan Motor Company was founded.

Radical Changes
In 1932, Morgan risked some minor changes, which included the addition of a fourth wheel. This model was called the 4/4 (four wheels, four cylinders). Nothing much happened for a decade or two; the radiator grill went from flat to rounded in 1954.

In the 1960s, the factory shoe-horned a 3.5 litre V8 into the engine compartment, widened the wings by an inch on each side, and named the result the Morgan +8; a ‘scary fast’ (Jim Kenzie of the Toronto Star) sports car that today out-performs the Porsche 911 Targa and the BMW M3 and gives the Ferrari Testarosa a run for its money from zero to 130km/h (at which point the latter begins to pull ahead). The Researcher of this entry has been lucky enough to drive one on the racetrack and the Autobahn (German motorway). With the top down and no windscreen, it will do 224km/h. Better not think about the 1909 front suspension when you are doing that. Current models still use the sliding pillar concept.
Saved by US Exports
For a while in the 1950s, the company went through a bad patch. The cars were outdated but not yet nostalgic, and sales in the UK declined. It was only exports to North America that kept the marque alive. According to an article in Esquire:

…from a Harvard Business School point of view, the company has done almost nothing right in its 83 years of existence. It has for the most part failed to automate or expand, failed to diversify, failed to change its product line, failed to turn to the stock market for new capital… It has, in short failed to do everything but succeed. 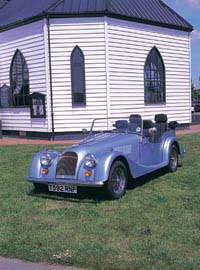 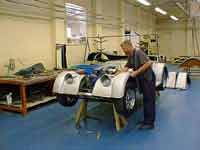 ‘Failed to automate’ is an understatement. A tour of the factory is like a visit to Santa’s workshop. The louvers in the bonnet are stamped out by hand using a fly-press. The wings are beaten over what looks like a tree stump. The door panels are trimmed with tin snips until they fit. Cars in various stages of completion, with a build ticket bearing the customer’s name, are pushed from one shed to the next.
Morgan Owners – a Special Breed
Owners become very attached to their cars and will go to great lengths to keep them. One owner, whose Morgan 4/4-4 (a four seater version of the 4/4) rolled out of the last of the eight sheds in 1973, battled with the German motoring agencies for months to get it registered. It then followed him to Canada as part of his ‘chattels’ (because it was more than 12 years old). There, all that was required was an inspection by the Ministry of Agriculture (they check for mud on the chassis) and he was on his way. 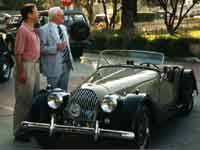 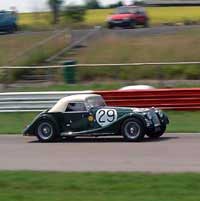 Morgan Owners – a Special Breed
The engine is a Ford 1600 cross flow – the same block that is in the Lotus 7. It breathes through a twin-choke Weber carburetor with a primitive filter, which, in the words of an American enthusiast, ‘keeps large bugs and small children’ out of the engine.
Around the world there are Morgan Owner Groups with names like SMOG-MOG (London), JOCK-MOG (Scotland), SEX-MOG (Sussex and Essex counties), and HOG-MOG (Toronto). The cars are often called ‘Moggies’. With its very stiff rear suspension and high power-to-weight ratio, it is a good car for slaloms, hill climbs and circuit racing. Morgan owners are usually active participants in one or more of these sports.
There’s a New Kid in Town!
Exciting things happen to Morgan drivers. It’s not unusual for a driver to return to the car to find fan mail and requests for rides. Police turn a blind eye – even the notorious former East German Verkehrspolizei. They once encouraged a convoy of Morgans on its way to Berlin to ‘give gas’ so they could hear the throaty sound of the Plus-8s.
Click to view a video on Morgan’s Plus 8

It Gets Better
Just when you think it can’t get any better, the factory announces a new model for 2001. The Aero 8 is immediately recognisable as a Morgan and yet it embodies the best of modern technology. It no longer has the ‘Z’ chassis of all of its predecessors – it uses a rigid aluminium monocoque cell construction
he rear leaf springs and front sliding pillars are replaced with a patented, state of the art suspension. Some of the body panels are still beaten by hand though. With a 4.4 litre BMW V8 engine and a curb weight of 1000kg, it has a top speed of 256km/h!
It’s no wonder that the advertising calls it
‘the last of the real sports cars’.